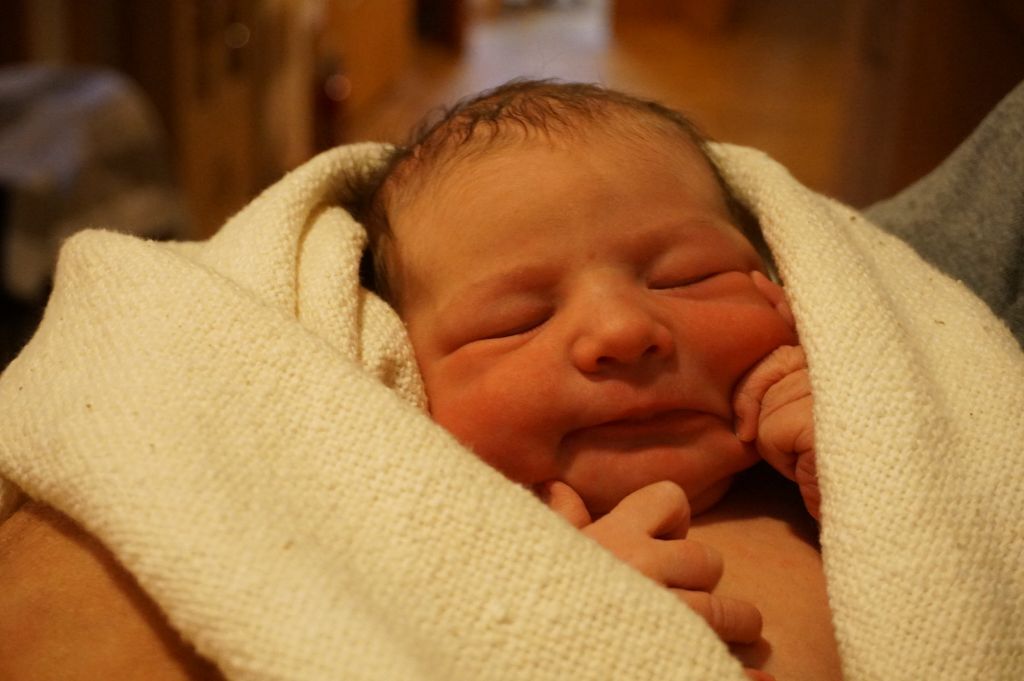 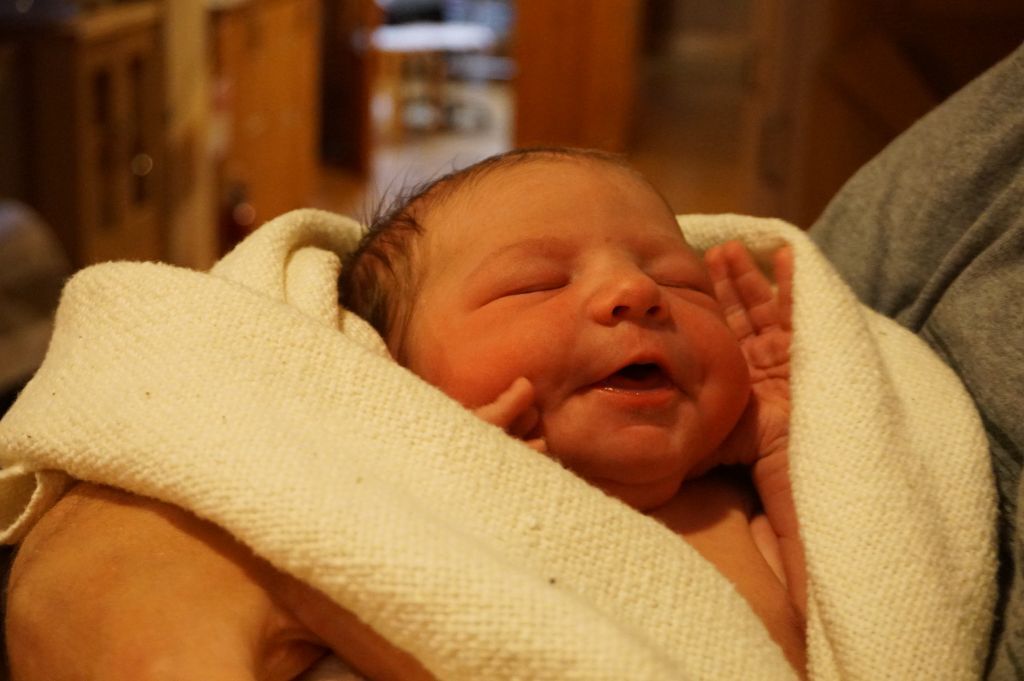 We arrived at the Clinic at 9am to talk to Dr. Fumi about induction. I was 41.5 weeks and my family was due to head back to the States in a few days so we were getting anxious. I’d been contracting inconsistently for days and I was exhausted. After looking over all of the consent forms we decided to just see if I had membranes left to strip and see what happened after that. I was 4 cm so they let us stay to see if a change of scenery and calm environment would encourage labor. It worked. After lunch I was having more labor but still not regular so we tried a homeophatic remedy and after dinner things picked up even more. By 8:30 I was having contractions every 5 minutes we called Lynn and Rachel (Doula and translator) and moved from our room to the birthing suite. Things happened quickly from there.

The midwife monitored the baby while Aaron and Rachel helped me through my contractions. I was proud of myself as I felt the baby lowering and got praised by my wonderful team. They told me I was getting close and to tell them when I felt the urge to push. I thought, “This is it”, and I looked at Aaron and said, “I knew I could do it!” which got a chuckle from everyone in the room. I’ve had two babies, both with some kind of medical intervention so I had no idea that “almost there” meant the hardest was still to come. We changed positions and reached my “I’m done with this” moment shortly after Rachel suggested I try to go to the bathroom so I made my way in there reluctantly. That’s when we discovered the spider. I literally looked at Aaron and said, “There’s a big ass spider over there” meaning by the tub. Just for context this is the spider to the best of my memory.

This is where things start to get interesting; obviously, I’m stuck on the toilet while Aaron, Lynn and Rachel try to wrangle the spider. I’m somewhere between 8-9 cm at this point and with each surge it felt like the Jaws of Life were breaking me open. Lynn said the spider went down the grate and was gone. It wasn’t. It had gone behind the toilet where I was still stuck. After another surge I looked up to an audience of wide eyes staring at the corner behind me. Obviously there was something there. They tried to play it off but I already figured out it was the spider so Aaron sets out to shoo it away from me. Well, in that effort he ended up flinging it on to me, mid contraction. You can’t make this stuff up I’m not kidding. I brushed it off as I shrieked. I realized the spider went back behind me into the corner and that Aaron was trying impact it with a toilet brush of all things. It’s comical now but at the time, I was not having any of it. He finally killed it and then everyone got to killed it and then everyone got to helping me get off the toilet, finally. At this point, any focus I had was gone. I was past the point of calm. I cried out with every surge begging for anything to take the edge off. Begging for someone, anyone to help me. I told them, “My bones are breaking.” I guess I have a flair for the dramatic but, hey! I survived the spider so give me a break on this one ok? After several surges, lots of begging and yelling, Sarah was crowning and I should have been slowly breathing her down. It’s all a bit of a blur but my water broke rather violently and Sarah came shortly after that. I don’t know how long exactly but I have a vivid memory of going from my knees to practically standing as Sarah crowned and then fully emerged, falling into the midwives arms as they scrambled to catch her. I climbed up Aaron like a ferel cat trying to escape. It all happened so fast. It was not graceful of peaceful but she came and we’re so happy she is here. Through it all Aaron, the midwives, Rachel and Lynn gave me all of the support in the world and made me feel good about all of it in the end. Sarah was born at 9 lbs, 205 inches, my biggest baby by a whole pound. I stand by the description that it felt like the Jaws of Life were breaking me open but I’m grateful to have done what I set out to do. A birth free from medical intervention. The atmosphere and care provided here are exceptional and I’m grateful for the experience! I hope you got a giggle out of this and that you are soaking up all the newborn snuggles!

Thank for everything Yui Clinic!